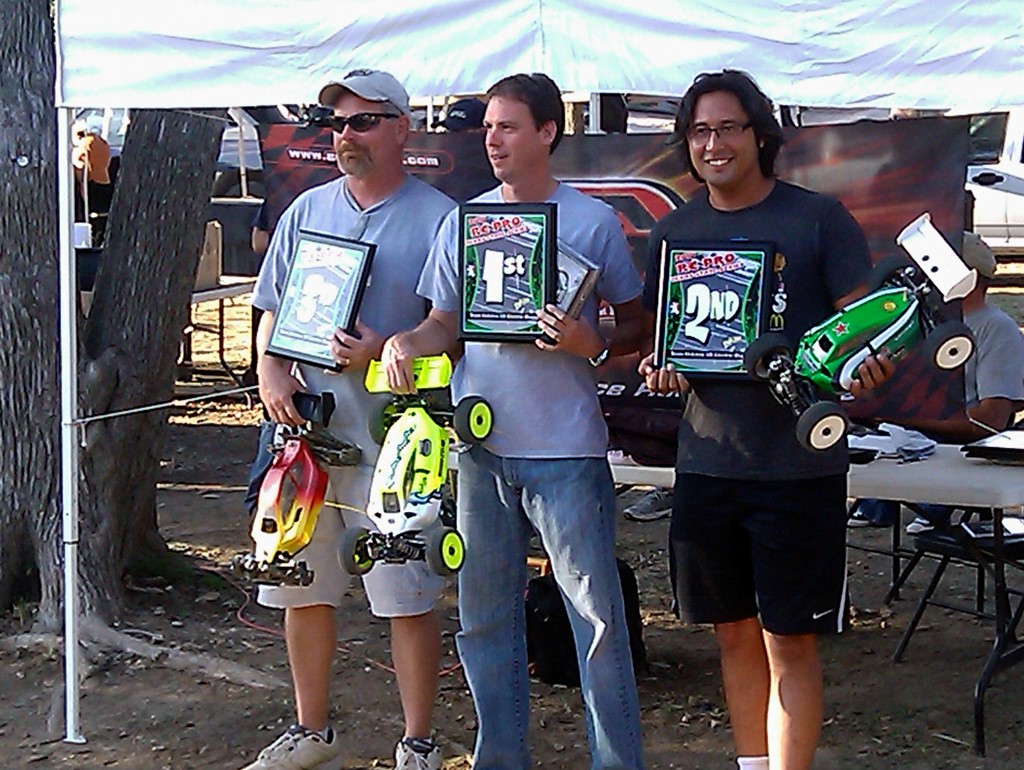 What is the story behind CarSports.com?...

We are a small company on the edge of Houston Texas consisting of my wife Courtney and I (Earl). Courtney runs the website and makes our apparel items. I design and manufacture our RC products.

When did you first get into RC?

When I was in junior high, Les, a friend of mine, had an RC10 gold pan edition. I was blown away with how fast it was but I did not have the money at that time to get one. Five or six years later, I moved to Houston and got a job working in an electrical engineering company. It was around 1991 when I bought my first real RC car. It was a graphite chassis version of the RC10. It took three races before I successfully finished a race without breaking or running out of battery power. Back then, we were using 1200ma batteries and you had to have the car geared just right to make it to the finish. I ended up going back to the aluminum chassis because the suspension never worked very well on the light graphite chassis. I also got my brother into the hobby when I had the RC10 and he had the Losi with the hydro drive. At that time, he had the advantage on me. It was fun back then with the Associated vs Losi rivalry.

I did not plan to get into 1/8 scale. I was out of the hobby for a while and someone told me there was a new indoor hobby shop called "Mikes Hobbies". Having an indoor track in Houston is a big deal because of all the rain we get here. It was very frustrating to work on your car and get all ready for the weekend, just to get rained out. Plus, you have too much money tied up in the electronics to risk getting them wet. But when I showed up to look at the track, it was 1/8 scale and everyone was running nitro. Well, I was an old school electric guy and did not want to run nitro. Associated had just came out with the B44. I bought one and tried to run it on the track but the big jumps and the hard packed clay was simply too much for 1/10 scale. So, applying my electrical background, I bought an Associated RC8 and converted it to electric. This was before you could buy any speed controllers for 1/8 scale cars. I used a brushless helicopter motor and a speed controller that was designed for an RC boat. I was the first person in the Houston area to not only convert an 1/8 scale car to electric but, after 3 years of working on the project, I won a 30min Amain against the Nitro's and that included a battery change in the middle of the race! It wasn’t long after that before we had enough people running 1/8 electric buggy to have a class of our own. I really enjoyed the challenge of pioneering the electrical 1/8 scale cars. Then, I ended up running both 1/8 buggy electric and Nitro because you only need one set of spare parts to race two classes.

Because it is one of my favorite hobbies and I just keep coming back to it. It is very hard to explain RC racing to anyone who has not raced RC. It is one thing to have an RC car and have fun bashing around with it but if you ever go up on the driver's stand and start racing, you are likely to get addicted. You experience all the adrenaline and emotions you have with any other type of racing, but without all the risk of injury. I would say it's not as expensive but it can get as expensive as you let it $$$$. However, you don't need much space to work on your cars. I started out doing it when I lived in an apartment. I would really encourage parents to get their kids into RC racing. It helps to develop them in so many ways. There is a huge educational side to it. Not only that, but the mental control side is just as important. Learning how to deal with wining and loosing will be a huge advantage throughout life. I also like motocross a lot, but it is a high risk sport. RC is a lot like motocross without the chance of getting injured.

What made you start CarSports.com?

It's ironic that Les, the one that got me interested in RC, indirectly caused me to start CarSports.com. He died in a street motorcycle accident. At that time, I still owned two motorcycles (YZ250 2 Stroke and KTM500EXC). We went to school together from 1st grade all the way to 12th grade. Our high school senior year we were on the tennis team together and he was my doubles partner. We both loved motorcycles, but after his accident, I decided I didn't want to take that much risk any more. So, I sold my 2 dirt bikes and took the money and bought a CNC machine as a new hobby. Then I needed to make something to learn how to use the machine. Naturally, my mind started thinking about RC car parts. And here we are!

Did you have any experience in manufacturing before starting CarSports.com?

Yes, my Dad owned several small manufacturing companies. When I grew up, we lived next to our shop. So from the time I was in grade school, I was sweeping up the welding wire and metal chips off the shop floor. After I graduated high school I went to Houston and now I have worked in Engineering and Information Technology for over 27 years. Buying a CNC machine was away of going back to my roots. I really missed the satisfaction you get when you make something with your hands. The product that I make are for myself because they are not available anywhere else. Or, at lease not at the quality I want.  After you go through the process of developing them, why not offer them to everyone else?

What is your goal?

Speed from Precision! This is how I won the 2010 RC PRO Texas State Championship in two classes (1/8 E-buggy and 4wd Short Course). Most of the time, the guy who is trying to go fast does not win but, the guy focused on precise lines will carry the most speed. I always tried to race the track and not the competitors. I believe this applies to a lot of things. CarSports.com will focus on great products, quick delivery, and make sure it's done with precision. Ultimately, the customer will win if we do it right the first time!